STUDENTS across the country have launched 48-hours of strike action, throughout secondary school and universities.

The Students’ Union are protesting against education cuts and rising tuition fees, and demanding the resignation of the Minister of Education, Culture and Sport, Jose Ignacio Wert.

The two days of strikes will start with pickets, to encourage young people to support the protest, while tomorrow protest marches will be staged in several provinces across Spain.

The Students’ Union has called on parent-teacher associations and teachers’ unions across the country to ‘not look away’, as explained by General Secretary of the SU, Ana Garcia.

“It’s more necessary now than ever to raise the banner of the green tide and take to the streets in the defence of public education,” she said.

With the addition of two more days of protest, The Students’ Union have now organised a total of 14 days of strikes against Wert and the education cuts. 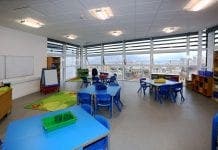 COVID-19: Spain reveals new guidelines for schools as children to return in September