I AM a horse lover. I always have been. In fact you can include donkeys in that, I’d add mules too, but I don’t know them so well. But horses and donkeys are my friends. I know it and they know it too when we meet.

And living in Sevilla our paths cross pretty often, be it as they tirelessly carry tourists through the elegant Maria Luisa Park or while parading around the dusty streets of the annual spring fair carrying their increasingly wobbly riders, tipsy from imbibing jugs filled with rebujito (manzanilla sherry mixed with chilled lemonade).

I’ve even ridden out in an Andalucian pilgrimage or Romería, a small one in the cutesie village of Los Marines in the Sierra de Aracena, in which I lived out my nine-year-old self’s dream as I actually got to ride a horse in a dress with a flower in my hair. 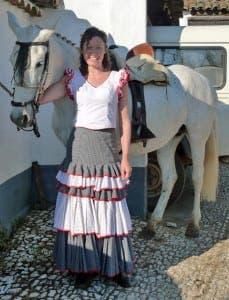 So it’s easy for an equine lover such as myself to get carried away with a sort of folklore romanticism when it comes to the Andaluces’ relationship with horses, but more than occasionally the mantle slips, and a dark side appears, leaving a bitter taste in the mouth.

Just today, while on the bus back from the Sierra de Aroche, where I’d charged up my equine batteries with some one-on-one horse and donkey contact, I happened to be skimming through the latest updates on Facebook, when a title ‘La otra cara de la Feria de Sevilla’ (The other face of the Sevilla Fair) caught my eye. It was quickly obvious what this other side was, as a picture showing a horse’s cadaver lying recently deceased next to the carriage it had been pulling, raised once again the issue of animal abuse at mass events like ‘La Feria de Sevilla’ and the equally famous and well attended Romeria of ‘El Rocio’.

This year the Feria has taken place at the beginning of May with temperatures hitting the upper 30’s. The horses spend most of the day parading around the Feria ground carrying their jinete (rider) or pulling the high and mighty of Seville society in ornate and heavy carriages. Rest periods are spent in the blazing sun, tethered in front of the Casetas (wooden marquees) as their human counterparts quench their thirst with their alcoholic beverage of choice. The more drinks that are quaffed, the less attention is paid to the welfare of their mounts. 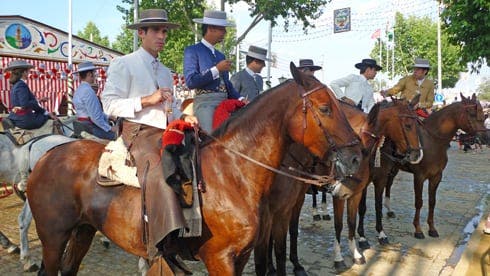 The same high alcohol, low animal welfare ratio applies to the horses used in the El Rocio Romeria, which takes place under the baking late May/ early June sunshine. Almost a million people descend on this spit and sawdust town lying in a sandy enclave of the Doñana National Park, all with a view of worshipping the Virgin of Rocio, or ‘the little white dove’ to her friends, a statue reportedly found in a tree trunk by a hunter in the 13th Century and revered ever since. 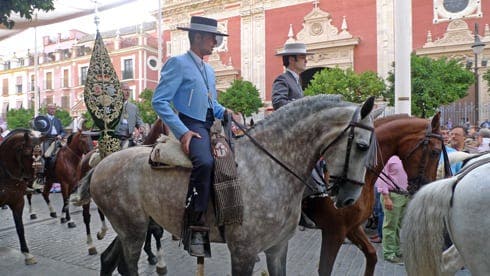 Pilgrims set out from hermandades (brotherhoods) from across Spain making their pilgrimage either on foot, in Oxen pulled gypsy carts or on the back of a horse. Every year there is an unpalatably high level of equine collateral damage, with horses dropping dead on route from exhaustion and others dying at El Rocio itself from starvation, lack of water and colic. The highest number of deaths was 25 in 2008, with last year 17 failing to make it back home. According to the Ministry of Agriculture, none of the deaths were as a result of neglect or cruelty, and occurred rapidly, some dying in seconds. Animal charity Asanda begs to differ, compiling their own report by equine veterinary specialist Marta Gallego Torres, on the possible causes of death, in which it was concluded that the most likely were indeed ´lack of water, stress, extreme exertion and lack of fluid´. It went onto say that in contrary to the official verdict of a swift end, much more likely would have been an ‘agonizing and painfully slow’ one.

But why do these avoidable casualties continue to happen? It would seem that amongst the more knowledgeable riders making the pilgrimage to El Rocio, there’s also a less experienced bunch riding rented animals, with very little common sense or indeed interest in treating their mounts as anything other than disposable modes of transport. In other cases horses that are barely exercised all year are yanked out of their field, with no level of fitness and expected to last the six days return journey. Not surprising then that some fall by the way side. As humans we wouldn’t expect someone to run an ultra marathon with no training, in Saharan temperatures, with little water, without expecting some fatalities. 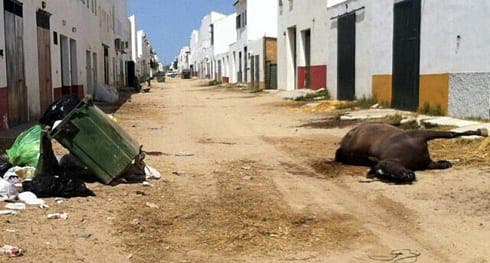 But what to do? Different organisations try to take proactive action to promote responsible animal welfare during the pilgrimage, such as handing out leaflets and providing volunteer vets on site. Indeed the Ministry of Agriculture, Fish and the Environment have an official 24 veterinary presence. But Asanda´s report calls for more vets both at El Rocio and on the pilgrimage route itself and for owners to immediately call on their assistance as soon as an animal shows any sign of physical distress.

But it also seems that the authorities do not consider these deaths worthy of prosecution. In Spain abandonment and cruelty to animals is punishable by law with potential fines of between 2,000 and 30,000 Euros, but the regular fatalities during this religious festival are rarely punished, mainly because proving they are not as a result of natural causes and are in fact directly related to abuse and neglect is extremely difficult. Last year not one of the 17 deaths (14 horses and 3 mules) were even reported to the police.

This saddens me to the depths of my horse loving heart. I know there are a whole host of responsible owners at El Rocio who probably dote on their steeds just as much as I did as a pony mad teenager, but this year the same thing will undoubtedly happen again with figures potentially rising as the festival falls later in the year and temperatures may well hit the near 40s. But I sincerely hope that a trickle of consciousness and compassion will permeate those making the pilgrimage and that they will think not just about their own liquid consumption, but that of their horses’ as well.

ONE FOR HORSE LOVERS: Spain’s Huelva recovers its traditional ‘Saca de las Yeguas’ after two years absence due to pandemic