‘SECRETIVE’, ‘exclusive’ and ‘elite’ are words that appear synonymous with La Zagaleta – said to be Europe’s most expensive residential estate and country club.

It is home to some of the world’s richest businessmen, oligarchs and celebrities, up in the hills above Marbella and with all-encompassing views along the Costa del Sol and out to Gibraltar and Africa.

Surrounded by rumours and jealousy – and easily one of the world’s slickest security operations – Zagaleta has the mysterious allure of a place that is both known, yet completely unknown.

And the latest rumour to pass out of its gates, down the hill and around Europe is that none other than Russian president Vladimir Putin is close to finishing a €19 million palace built within its borders.

The soaring mansion, sitting atop its very own peak, was revealed to be owned by a group of six incredibly wealthy men by the Olive Press a month ago. Whether one of them is Putin cannot, and might never, be proved.

What is for sure though is that this 2,200-acre enclave – actually in Benahavis and not Marbella – is exactly the kind of place one could imagine a Russian president residing. Flying in by helicopter and luxuriating at his 10-bedroom mansion, taking a dip in the infinity pool before entertaining the elite.

And, as it turns out, this might in fact be the case, as a senior member of the Zagaleta management team explained to us, on a tour of the estate this week.

In unprecedented access (journalists are hardly ever even allowed to enter the office), the paper was given a guided tour of ‘Europe’s most exclusive estate’ and given an incredible insight into what makes it tick.

Even more excitingly, the senior executive, who asked to remain anonymous, told us: “Let’s be honest, it’s unlikely Putin is even earning enough money to afford to build this villa, but of course it is somewhere he may come and stay in the future.”

The home in question stands out from miles around due to its sheer size. The 4,000m2 palace is now 90% finished and a team of builders is still working around the clock to get it finished.

According to one local agent, so secretive is the owner that somehow websites that help to search for property deeds do not display information for it. “I tried two different websites and both time I got kicked off mysteriously,” said the agent.

And even when you get into the estate you cannot get near it. There is a security gate at the bottom of the hill and even if you were to get there, you have to show ID, with the builders and all staff allegedly being frisked

down and made to hand in belongings upon arrival and then searched again on their way out. It’s serious business.

But then again, so is the whole of Zagaleta estate, which is manned by highly-trained, armed guards 24/7 and entry is impossible without prior arrangement from a homeowner, or La Zagaleta itself.

The executive agreed to meet me at the south gate and take me into this elusive club.

And his first job was clearly to try and squash the rumours linking celebrities such as Hugh Grant, Rod Stewart, the former Mayor of Moscow, Mark Thatcher and – dare I say it – Putin to this estate, where community fees set you back a cool €100,000, let alone the bill for the multi-million euro villa.

Turning up at the gate in a battered old hire car I was anxious how the security guard would react. I had heard from a former owner that even the guards were ‘snooty’ and liked to look down on people, even residents, there.

My anxiety got the better of me as I tried to explain what a poor boy from Reading was doing there while edging up a very steep slope and inevitably stalling the engine, leaving me red-faced as a Rolls-Royce Phantom glided past in the other direction.

Once inside Zagaleta and snaking through its 60 kilometres of road (considerably more than Gibraltar), other cars do not exist. The only vehicle we crossed paths with was a Zagaleta service van.

The services on offer, I was told, are utterly comprehensive.

“They offer every service imaginable for people who don’t necessarily have live-in staff,” explained estate agent Michael Corry Reid, Director of Aylesford Spain, who sells a lot of homes in the enclave.

The villas vary dramatically, from elegant Moorish designs with sea views to new modern builds surrounded by forest, each complete with pools and jacuzzi though.

But the best views are found at the estate’s helipad, which allows those with the deepest pockets to land at Malaga airport in their private jet, hop on a helicopter and 10 minutes later they are sipping a cocktail outside their villa.

And Zagaleta certainly provides the security required to relax and unwind, with armed guards and pack dogs constantly patrolling on and off road.

Every property is also directly linked to central security, meaning touching a panic button delivers the weight of Zagaleta’s forces to your doorstep within seconds.

Clive Jacques, a veteran journalist, told me the richest person he has ever met in Spain was a Zagaleta resident. “He had nine cars including a Bentley, a BMW and a Zonda, but going for dinner in Marbella was a nightmare as we had to drive miles out of our way to avoid speed bumps in the estate,” he recalled.

And it wouldn’t be the Costa del Sol without a stunning, top-of-the-range golf course. Well, Zagaleta has two.

And there is no problem getting a tee time, as long as you have a home there, that is.

The clubhouse by the way, was originally the home of billionaire businessman Adnan Khashoggi, and he clearly had an eye for a good view.

The entrance is studded with his hunting trophies – stag heads – and the communal areas are elegantly furnished.

After his fall from grace for arms dealing, the estate was confiscated and then purchased by its current owners – a Spanish/Swiss consortium – in the mid 1980s.

The development officially began being marketed in 1991 and has been regarded as the height of luxury living ever since.

Currently around 30% of residents are British, 30% German, 15% Scandinavian and 10% Russian, while the staff appeared to be 100% Spanish.

At the moment 250 homes have been built, but there is room for 410 and another zone at the far end of the estate is soon to be released.

For many owners it is their third, fourth, even fifth home and hence they spend just a small portion of the year there.

So rich are its residents (and those of neighbouring Madronal) that Benahavis, the small town under which its jurisdiction falls, has Spain’s richest residents according to GDP per capita.

But stepping deeper into the members club is like stepping into 1950s Marbella, with its plush curtains, carpets and quirky ornaments, if only photography was not banned in this time warp.

The estate also boasts its own state-of-the-art equestrian club with Spanish and Arab horses, white ponies for children and expert instructors. There is at least a day’s worth of picturesque off-road tracks for horse-riding and hiking through the mountains.

A grand re-launch of Zagaleta had been expected in June, but this has apparently been delayed by the club’s very own ‘civil war’.

A group of English owners had been locked in a power struggle with the owner of Zagaleta for many months, as they campaigned to take over the running of the estate.

“It has been a war,” explained one local agent. “They have not been able to do anything because of this dispute but thankfully it’s all resolved now.”

However, another, Mr Corry Reid, insisted it was merely a ‘misunderstanding’.

“In any place with a lot of money there is bound to be some level of confusion,” he explained.

“But it’s really not that flashy here and it’s certainly not a celebrity place, rumours start because people can’t get inside to see what it’s actually like,” he added.

Sentiments echoed by my guide, who was keen to generally play down the image of Zagaleta as wealth personified while we stood on the clubhouse terrace.

However, the group behind us sipping champagne and puffing on cigars the size of baby’s legs didn’t help his cause.

It’s undoubtedly true that many residents have ‘friends in high places’, including a former British Prime Minister who visited a Zagaleta pal in recent years.

As Tony Blair and family have been spotted in Marbella several times, it looks likely he was the PM in question.

But I was convinced by the estate’s genial community atmosphere, it appears almost every resident knows each other and there is clearly a relaxed aura.

They also happily abide by the estate rules, forbidding construction at weekends among other things. And importantly, ensuring a 10 metre gap between plots to allow wild animals – deer and goats – to continue roaming freely.

If Zagaleta sounds dreamy but unattainable then don’t fear, as one of the little known secrets of the place is that there are actually apartments for sale at a wholly reasonable €350,000, originally the staff quarters for Khashoggi.

So maybe the possibility of being inside the fence, at the start of the Chinese Whispers line, is not as unreachable as people think. 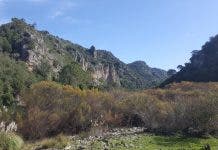