I WAS making one of my customary ventures down to the coast from my lakeside lair mainly to purchase a giant-sized can of some arachnid repellent (more of which later), when I noticed a new billboard by the Banus bullring foretelling an exciting development project.

I have the ‘Midas touch’ in reverse when it comes to property sales. On both occasions that my long-suffering father has suggested that I ‘get a proper job’ and join the family firm, the market has crashed mere months afterwards.

On closer inspection, however, it wasn’t the usual photograph of the proposed development that had caught my eye. The proud slogan can be seen in the picture above.

I suppose 30 years of blocking ‘innovation and creativity’ really is something to shout about. You can just imagine the scenes at head office over the past three decades. “Mobile phones? Who needs them! An iPod? But I already have a Walkman! The Internet? Flash in the pan!!!”

Not so itsy bitsy

I decided to take one of the kayaks out on the lake last weekend. It’s been an unseasonably dry winter and as the reservoir that the casita faces supplies most of the coast, the water level has been dropping quickly. Last year I was able to swim from the bottom of the garden (which should give you something to ponder when you next turn on the tap) but now it’s a two-minute trek to the water’s edge. As it had been a while since I took this particular kayak out, I gave it a bit of a shake before I slid into it.

I’m bloody glad I did, because on the third shake, a huge spider shot out, shook a couple of limbs in my general direction and sped off up the nearest tree. The cats took flight in the opposite direction and I let a most unmanly scream.

I had disturbed an arana cangrejo gigante – giant crab spider. As I told my friends later, I wasn’t really scared. Just unprepared… 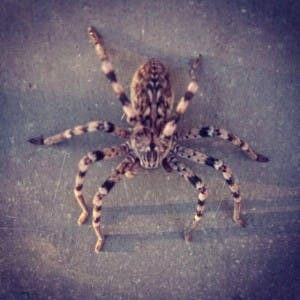