IT is a spectacular sight. The streets of Sevilla lined with bulky oxen pulling gypsy-style caravans while proud Andalucian stallions flick their tails excitedly.

A dark-eyed young woman applies thick lipstick, while sitting side-saddle on her steed, dressed exuberantly in a polka-dot flamenco dress and matching flower in her hair.

The beer is already flowing and the drums rolling, the excitement and expectation hang unmistakably in the air, as man, woman and beast wait impatiently to begin their week-long round trip, taking them through the wild,

Andalucian terrain to the object of their devotion, the Virgin of Rocio.

Welcome to the world of the Romeria, or pilgrimage, a far cry from the sexless sterility of the catholic religious festivals I was forced to attend as a child.

They take place in every village and town in Andalucia, but nowhere tops the drama and spectacle of the Romeria like ‘El Rocio’.

The week-long festival that took place in the baking Andalucian heat this month, is where religion, fashion, flirting, booze and revelry join together in a heady mix that guarantees a week of sore feet and hangovers.

But it’s that very combination of intense Andalucian sun, long days crossing the parched earth and even longer nights of intense partying, that each year results in a darker, less folkloric side to El Rocio. 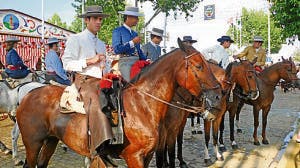 The equine collateral damage is, quite frankly, horrendous with horses dropping dead mid-journey from exhaustion and others dying at El Rocio itself from starvation, lack of water and colic.

And this year as the hermandades (brotherhoods) set out slightly later than usual in the second week of June, the unforgiving heat pushed the thermometers up to heat-stroke-inducing levels.

In total 13 animals died (four less than last year), as winds of change seem to be bringing more consciousness to the general public, if not the hardcore Rocieros themselves. A Malaga based animal charity El Refugio Burrito decided to take affirmative action and go undercover to find hard evidence of cases of animal cruelty. And sadly they were not disappointed, attending dozens of cases, among them a pony, who although blind in one eye, lame and with a bloody wound on his nose, was discovered pulling five children in cart.

The pony, along with three other horses, who were also covered in infected wounds, were being hired out illegally on an hourly basis by a man who is now under investigation by the Guardia Civil. The animals have since been moved to the charity’s headquarters where they are receiving veterinary treatment.

Each year without fail horses, mules and donkeys perish – usually in their dozens – but the highest number of deaths was 25 in 2008, with 17 failing to make it back home last year. According to the Ministry of Agriculture, none were as a result of neglect or cruelty, and occurred rapidly, some dying in seconds.

Animal charity Asanda begs to differ, compiling its own report by equine veterinary specialist Marta Gallego Torres, on the possible causes of death. It concluded that the most likely causes were indeed ‘lack of water, stress and extreme exertion’.

It went on to say that – contrary to the official verdict of a swift end – most died an ‘agonizing and painfully slow death’.

But why do these avoidable casualties continue to happen? It would seem that among the more knowledgeable riders making the pilgrimage to El Rocio, there’s also a less-experienced bunch riding rented animals, with very little common sense or even interest in treating their mounts as anything other than disposable modes of transport.

In other cases horses that are barely exercised all year are pulled out of their field, with no level of fitness and expected to last the six-day return journey. It’s hardly a surprise then that some fall by the wayside. As humans we wouldn’t expect someone to run a marathon with no training, in Saharan temperatures, with little water, without expecting some fatalities.

But what to do? Different organisations are trying to take proactive steps to promote responsible animal welfare during the pilgrimage, such as handing out leaflets and providing volunteer vets on site.

The official Plan Romero 2009 guidelines for horses encourage riders to ‘be conscious that your horse is a living being and not a machine…. And to respect and treat it like the friend that it is’.

For most animal lovers this would seem like rather obvious advice, but the fact that since its publication four years ago, 83 deaths have occurred, suggests the touching sentiment has fallen on deaf ears.

As well as these guidelines, the Ministry of Agriculture, Fishing and the Environment provides an official veterinary presence as part of its ‘Operacion Romero’.

But Asanda’s report calls for many more vets both at El Rocio and on the pilgrimage route itself, and for owners to immediately call on their assistance as soon as an animal shows any sign of physical distress.

However this does not look likely to happen soon, and a general lack of interest in these statistics by the powers that be would suggest these animal deaths are not considered worthy of prosecution.

In Spain abandonment and cruelty to animals is punishable law with potential fines of up to €60,000 and prison sentences between three months and one year. But the regular fatalities during this religious festival are rarely punished, mainly because proving they are not a result of natural causes and are in fact directly related to abuse and neglect is extremely difficult.

My hope lies in the actions of the incensed few, such as the volunteers from el Refugio Burrito, whose horrific images have brought more attention to the flagrant lack of concern in some quarters for the animals present at El Rocio. This may in turn have a trickle down effect on those ordinary people attending the festival in their hundreds of thousands, and who might just perhaps take their own action and report any future incidences of cruelty and neglect to the authorities.

But the real change must come in the mentality of those remaining few who view horses, mules and oxen as little more than expendable modes of transport. Maybe, just maybe, fewer will die as a result.

If you would like to make a donation to El Refugio Burrito please visit their website: http://www.elrefugiodelburrito.com/en