AN AIRCRAFT from Algeria’s national airline Air Algerie has gone missing with 116 people on board, including six Spanish crew members.

The airline said it lost contact with flight AH 5017 about fifty minutes after its takeoff from Ouagadougou.

Just after leaving Algerian airspace, the airliner was redirected because of ‘poor visibility.’

Authorities in Niger, Mali, Algeria and Spain are launching search efforts for the missing plane.

The following nationalities were on board the plane, according to the Associated Press news agency: 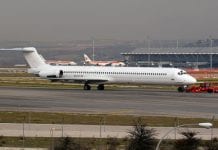