My first breath of Pamplona air somehow forced every line of Hemingway’s delicate prose to rush back. The entire weekend I couldn’t help feeling like I was walking in his footsteps, completing a rite of passage that every American dreams about. Hemingway and his time in Spain are part of our collective national history.

You either love or hate our famous expat/writer/playboy/alcoholic, but regardless, you certainly know having read his first novel The Sun Also Rises that the festival in Pamplona, Navarra, is not something to miss.

Picture this: an entire city bathed in white and red. Every person you meet has donned snow-white clothing with a dazzling red scarf.  Everyone wears the same uniform for nine days, but somehow retains their individuality, creatively accessorizing within the strict guidelines of the festival’s color scheme.

And when you put it on yourself, you know you’ve made it. Walking out into the streets of Pamplona proudly following the dress code, I felt energized, like I was part of something way bigger than myself. I was part of the collective fiesta of Sanfermines. 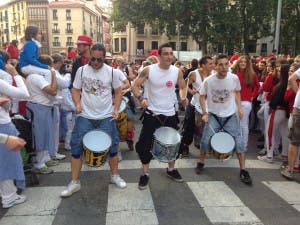 Now, I come from Louisiana, so I have seen my fair share of city-wide debauchery and festivity with its annual Mardi Gras festival, but Sanfermines is different.

At Mardi Gras, everything is a spectacle: people flash each other in the street, attend the massive parades, or make appearances at the glitzy, star-studded balls.

At Sanfermines, as the Spanish know the festival (for us yanks and you limeys, it is predictably, ‘Running of the Bulls’), people party all night long for nine nights, but no one is obnoxious. Everyone apparently loves each other and plays nice. Ask anyone for a cigarette, a light, a drink from their goatskin of wine, or even the sweater off their back, and they will surely give it to you with a smile and not an ounce of disdain.

The festival is held every year from July 6-14 with a plethora of events, everything from traditional Basque sports like wood-cutting to the daily bullfights where drum lines and circus performers accompany the nail-biting event.

But none is more famous (or perhaps infamous) than the encierro, the ‘running of the bulls’. 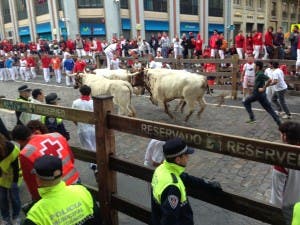 Every morning at precisely 8am, a rocket goes off, signaling the release of the bulls at the start of their 825-meter mad dash to the ring.

Marauding through the city, the over-500kg beasts negotiate the hundreds of runners who take their lives in their hands to say they’ve ‘run with the bulls.’

Though I did not attempt the feat myself (editor’s orders), I did have the unbelievable luck of getting a prime spot to watch it happen.

After an entire night out, imbibing in the nonstop party of San Fermin, I climbed up to my seat on the spectator gates around 6am.

It was truly mystifying watching this massive street party clear out entirely, as police started setting up gates, blocking off the path where the encierro would soon rampage.

Soon, the police line appeared in the street, a set of burly security guards vigilantly watching for any drunken fool to stumble into the danger zone.

The appearance of the crowd control completely changed the energy, initiating a wave of quiet excitement across the masses.

Anxiously waiting, I was constantly checking my watch as I chatted with a friendly Spaniard, patiently teaching me the delicate difference between the pronunciations of ‘todo’ (all, everything) and ‘toro’ (bull). 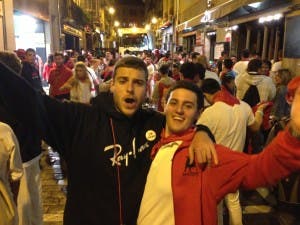 But suddenly, our conversation was interrupted by the sound of a rocket exploding in the distance. Sure enough, my watch read exactly 8am and a suffocating hush fell across the entire city. Slowly, we heard a frenzied gallop growing louder and louder as the excited bulls and corredores approached. In a blink of an eye, the entire procession was before me and in another it was gone.

It is a strange thing to witness such a highly-anticipated event, one that’s full of danger and anxiety, when it’s compacted into a mere two seconds. You are left feeling somewhat cheated, yet somehow undeniably satisfied.

What I really enjoyed, were the moments just after the run. I slowly wandered back to my bed, lifting my head above the streets of Pamplona, the sun also rising.

I never knew why Hemingway titled his novel in this way until experiencing first hand the comforting feeling of the early morning sun, brightening the fiesta-soaked city after a night full of hazy bars and the clamor of nightlife.

Everyone walks away from the run seeming confident, having achieved something whether they ran or not because no matter what, they were part of Sanfermines. They were part of a collective celebration that is truly unique in every way possible.

Walking home in the gentle light of the madrugada, I smiled, acknowledging the moment before doing it all again the next day.

Missing American college student Kenny DeLand Jr. found in Spain after ‘seeing himself on the news’