A ROW has broken out as it emerges that the developer behind the controversial Algarrobico hotel received money from the European Union to aid construction 12 years ago.

The government has now set up a special delegate to investigate the affair and find out how the long-running environmental scandal began.

Both the Junta and the central government are denying they were responsible for channelling the €2.8 million grant to the illegal hotel in a natural park in Almeria.

The Junta allegedly helped to process a €2.8 million grant given by the finance minister to build the hotel in Carboneras, Almeria, on a Unesco-protected site in 2002.

The 411-room, 20-storey hotel has been the subject of constant legal wrangling, as well as a Greenpeace campaign in which it had the words ‘Hotel Ilegal’ painted on it.

The PP government has not denied that it was prepared to put forward a grant for the hotel – which remains a half-built eyesore – but is claiming it was up to the Junta to make the final decision as to whether construction was viable and legal.

However, the PSOE Junta’s environmental department is, in turn, pinning the blame directly back on the PP government’s grant.

The Junta has insisted that it never agreed to give any grant to the company originally behind the hotel – Azata del Sol – and denies any involvement.

“The PP deliberately lied about the case and are ‘two-faced’ in their dealings with the hotel,” said Maria Jesus Serrano, Junta minister for environment and planning, at a conference in Cordoba.

She added that the only possible scenario for the hotel now is its demolition, confirming that on December 12 the Junta will formalise the right to seize the property.

She stated that the costs in this process are minimal and will not be added to the €2.3 million that has already been put aside for the acquisition of the land where the hotel was built in 2006.

Serrano also demanded that the president of Andalucia’s PP Juan Manuel Moreno confirm his position over the hotel.

“Is he going to be brave and make his position on the hotel clear, like we have?” 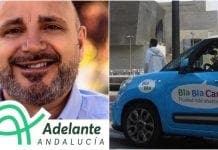