UK actress Jaime Winstone seemed entirely unimpressed at the antics of her model friend Lady Mary Charteris on a holiday in Ibiza.

The picture was generously put on Instagram by Mila’s fiance Jamie Burke.

Ray Winstone’s daughter has just finished filming movie Love, Rosie, having starred in Made in Dagenham in 2010. 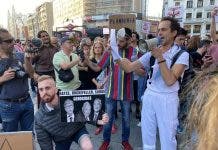