THE Spanish nurse infected with Ebola  has now tested negative for the virus.

The result suggests Teresa Romero, 44, is no longer infected – although a second test is required today before she can be declared free of Ebola.

Romero contracted the virus when treating two infected patients in a Madrid hospital earlier this month.

She tested positive for the virus on October 6 after treating two missionaries repatriated from West Africa.

A spokesperson from Carlos III hospital in Madrid said Romero was ‘developing favourably’ and was now breathing unassisted.

Romero was reportedly given a human serum containing antibodies from Ebola survivors.

A government statement on Sunday said that a blood test appeared to show that the virus was no longer in her body.

Fifteen other people remain under observation in quarantine but have no reported signs of Ebola.

The Ebola outbreak has killed more than 4,500 people across West Africa. 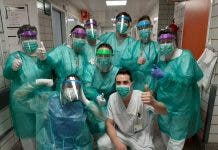 LOOKING UP: No coronavirus deaths on Costa del Sol in past 24 hours