The head of the hospital’s infectious disease unit, Jose Ramon Arribas, said Romero ‘no longer posed a risk and could now lead a normal life’.

Romero contracted the disease after treating two Spanish missionaries who had returned from West Africa but later died of Ebola.

She was given the all clear on October 20 after being diagnosed with the virus on September 30. 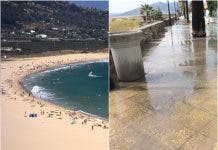