LOCK up your daughters! British boyband One Direction are coming to Madrid.

The quartet – who rose to stardom on hit TV show X Factor – have been nominated for four awards at Madrid’s Premios 40 Principales and are set to bring the house down with a headline performance.

Last month, the 1D boys confirmed they would also be dropping in on the El Hormiguero studios, in Madrid, to make a guest appearance on the comedy show. 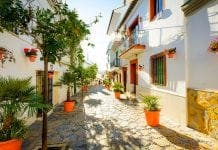 From flower pots to historic architecture, these are the towns in Spain’s Andalucia that won urban planning awards