AFTER battling our way down the Rio Guadalmina – forced to leave one of our team behind – we had eventually found what appeared to be a way back to civilisation.

But a series of bent metal steps jutting out of the vertical rock face had never looked less enticing, as I clutched my shaking body and scanned the cliff for an alternative.

Two-and-a-half-hours previously, three of us had set off just south of Benahavis on the river walk – sometimes called canyoning – with no idea what to expect.

Driving up the valley towards the village gives no indication of the exhilarating, some would say ‘hard-core’, experience you are about to have.

After parking our car near the head of the gorge, just a few hundred metres south of the water tower roundabout, we walked down to the river and initially hovered awkwardly around the first pool, uncertain whether we were in the right place.

Finally taking control in true Bear Grylls fashion, amid shouts of ‘It’s not deep enough’ and ‘You’re going to smash head-first into that rock’, I lowered myself onto a slippery waterfall and went plunging into the murky water below, screaming as I went.

As I resurfaced, shouting my approval while messily ejecting river water from my mouth, the others ditched their fears and bounded down to slide in after me, and that was it, we were off.

A series of open pools, bridged by slippery rocks and feisty little waterfalls took us down deeper into the gorge, until the sun was obscured and the November chill began to take its toll on our exposed torsos.

Little frogs and fish bounded around our ankles as we tried to locate a foothold in the riverbed, while an enormous dragonfly sent me crashing when it shocked me into losing all sense of balance.

The rocky path opened up into long, deep stretches of stream that required swimming, and we were soon engulfed in the beautifully peaceful valley.

But when we came upon a pitch black cave that had to be swum through, one of our team of three began to raise serious questions.

Questions like: ‘Are we sure this is even the right river?’, ‘Is there ever going to be a way out?’ and, most pertinent of all, ‘Are we going to have enough energy to go all the way back up when we eventually decide to turn around?’. 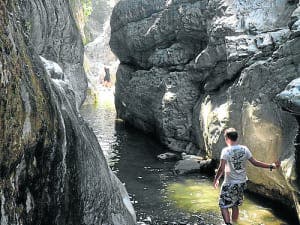 But untroubled by negative mumblings at the back, I surged forward through the narrow passageway and emerged clambering over slimy rocks, only to realise I was well and truly alone.

After what seemed like an eternity of unanswered shouts and shivering, I beat a solitary path onwards; confident I would find the end and meet the weaklings in my group back at the car.

But at that moment I was overjoyed to hear a clumsy sloshing from behind me, as the rest of the team followed.

And ten minutes later we found ourselves face to face with the questionable metal ladder, one missed step and we were dead.

So instead of watching my violently shivering companion slip and slide his way up the perilous cliff edge, I got on all fours and improvised, hauling myself up the rock using grubby handholds and tree trunks.

Perhaps, in hindsight, canyoning down the river is more of a hot summer’s day activity – at least without a wetsuit – and a brilliant one at that.

But even in the November drizzle, it was a great adventure, and I can’t wait to do it again.