THE agonising death of five dogs in Competa is being treated as ‘suspicious’ by the Guardia Civil.

The dogs – a mix of Huskies, Newfoundlanders and Podencos – died in a matter of minutes from internal bleeding after ingesting what is believed to be strychnine poisoning.

They were discovered on the side of the road, looking in pain, by expat couple Marian and Jacob Madsen who took them to their German owners.

“We passed the bins on the road from Competa to Torrox and noticed the dogs,” said Marian Madsen.

“Suddenly the Huskie began to lose his legs under him, trembled and vomited.

“My husband screamed ‘he is poisoned’ and I grabbed the dog in my arms and rushed up the dirt road to where we could hear their owners.”

The dogs’ owners – who wish to remain anonymous – told the Olive Press that they suspect the poisoning was carried out ‘on purpose’.

Expat vet Jens Klausen examined the dogs shortly after they died and said he was ‘90% sure of foul play’.

He said: “The dogs were definitely poisoned, they all died within minutes of eating the poison.

“Strychnine is often left out illegally by Spanish hunters to kill foxes and stray cats so that could have been what happened. But it may be that someone deliberately gave the dogs the poison.”

So far the Guardia Civil have made no arrests but have been talking to residents in the area. 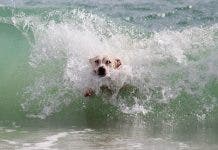