It is a landmark moment for women’s golf, which has seen a huge rise in popularity during recent years.

A study in the UK found that only 14% of the 1.2 million golf club members were female, a statistic which many organisations are attempting to even up.

Elsewhere, a landmark vote in Scotland last year means women are now allowed to join the Royal and Ancient Golf Club of St Andrews for the first time.

She will also have a direct influence on the design of a new trainer – the Go Golf Blade – to be released this year.

“I’m so excited to join the Skechers Performance family,” said Mozo. “They put the same energy and passion into designing a great shoe as I do toward elevating my game.”

The Spaniard, who began golfing aged eight, led her national team to victory at the inaugural LPGA International Crown in 2014. 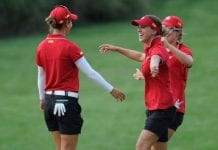