SOME of the best darts players in the world are set to descend on Gibraltar for the darts trophy this March.

World number one Michael van Gerwen and world champion Gary Anderson are just two of the stars who will be competing alongside four top local players in the Gibraltar Darts Trophy.

The three-day event kicks off on Friday 20 March, with a total of six sessions concluding in the final at 7:00pm on Sunday 22.

Last year’s winner James Wade will also be returning to fight for the £25,000 first place prize.

The competition, held at the Tercentenary Sports Hall, is organised by the Ministry of Sport in conjunction with the Professional Darts Corporation and is one of nine European Tour events this year.

Tickets go on sale from Wednesday 28 January. Two types are available; Table Tickets, for the numbered floor tables, and Tier Tickets, which are seated in the unreserved stand.

They can be purchased:

-From the Ministry of Sports, third floor, City Hall, John Mackintosh square between 9:00am and 4:00pm. 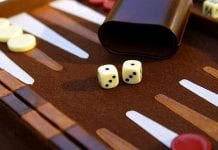 Diexter Thomas - 9 Apr, 2020 @ 20:06
The confirmed cases have risen to 123 in Gibraltar and active cases are now sitting at 63 as police make sure no one goes to the beaches this weekend.