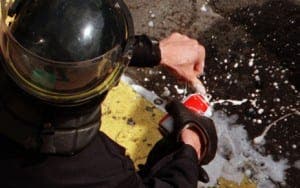 A RIOT police leader was caught seeing double with three times the permitted alcohol level and travelling against traffic in Pamplona, Navarra.

The inebriated high-ranking National Police commander in charge for the Police Intervention Unit of the Basque Country and Navarra was arrested and removed from office.

The 56-year-old is to be disciplined in accordance with the police’s disciplinary system following his reckless driving regardless of the upcoming judge’s ruling on the case.

Provincial police made the arrest on the A-15 in West Pamplona going from the town of Berriozar not long past midnight.