Mercedes driver Nico Rosberg unleashed the W06 Hybrid on the track in southern Spain on Sunday – while 2014 world champion Lewis Hamilton is expected out on Monday.

Red Bull and Williams also revealed their new 2015 season cars as the four days of testing got underway with the Red Bull RB-11 appearing for the first time in a camouflage livery. 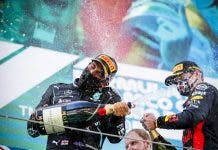