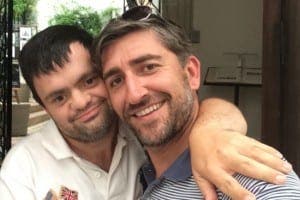 LOOKING after somebody with Down Syndrome is a serious undertaking.

But when Manni Coe discovered how low his brother was in England, he saw no other choice than to convince him to join him in Spain.

Two years later and they’ve never looked back: Reuben is a big hit among the local expat population and an inspiration around the world.

His new blog, Reuben’s World, is a direct product of his rich imagination, has the potential to change global perceptions of Down Syndrome… and, at the very least, raise some smiles.

>> Welcome to my world: Expat plans to launch blog for brother with Down Syndrome