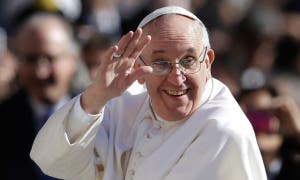 A TRANSSEXUAL Spaniard has met with the pope after being denounced by his priest as ‘the devil’s daughter’.

Diego Neria Lejarraga, 48, who was born a woman, wrote to Pope Francis last year telling him that he felt like an outcast from the church following his sex reassignment surgery.

He added that he felt he had been rejected by some of his fellow parishioners at his church in the western Spanish city of Plasencia.

Francis – who is becoming known for his surprise phone calls – rang him on Christmas Eve.

Neria and his female fiancée then met with the pope this weekend at his private residence in the Vatican in a ground-breaking moment of acceptance for transsexual people within the church.

Francis has developed a reputation for acceptance, appearing on cover of gay magazine The Advocate, after responding to a question about gays saying ‘who am I to judge’.

Neria said: “After hearing him speak on many occasions, I felt that he would listen to me.”

Francis’ take on homosexuality is considerably more lenient that his predecessor Benedict XVI, who described gay sex as ‘intrinsically disordered’.

James Warren - 8 May, 2021 @ 15:45
ON the anniversary of the fall of Tenochtitlan and the start of Spain's rule in Mexico, a group of indigenous Zapatistas have set sail...

INVESTIGATION: How a ‘stoner tax’ is lining the coffers of local town halls in Spain and why a new...

EXTRA FREEDOM as midnight curfew and extended bar hours are approved by top judges in Costa Blanca area of...