A BILLIONAIRE property investor who avoided tax in Britain for 24 years has been tracked down to a Puerto Banus apartment by the Olive Press.

Paul ‘Boom Boom’ Bloomfield has been linked to – and has lived in – a luxury apartment in the Los Granados urbanisation, seconds from the beach-front.

Bloomfield featured in a Panorama investigation into the HSBC offshore account scandal, in which he was labelled as one of the most extreme cases.

He owned a helicopter, private jet and several homes without ever filing a single tax return in over 20 years. However, he has not been prosecuted.

The apartment in Puerto Banus is in his wife Marilyn Watt’s name, although security guards on site claimed it has been rented out and she has not been seen there for some years.

However, other Olive Press sources claim Bloomfield himself has been seen on the urbanisation several times in recent years.

He has apparently been coping badly from severe diabetes, with his wife taking care of him.

The apartment is in a large block behind gates with 24-hour security, as well as tennis courts, a restaurant and other facilities.

HSBC has been the subject of a major scandal after it came to light that thousands of its customers were encouraged to set up offshore accounts.

Bloomfield, who helped organise the financing of the new Wembley stadium in 2003, met HMRC investigators in 2011 but told them he did not own an offshore bank account, any property or have an income of his own.

But the HSBC files given to HMRC reportedly show Bloomfield did have an offshore account with the bank in 1993.

Tax officials were said to have not believed his denials about not having any income and concluded he was liable for tax for the past 20 years, but he was not prosecuted.

Have you seen Bloomfield? 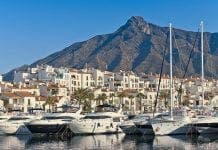