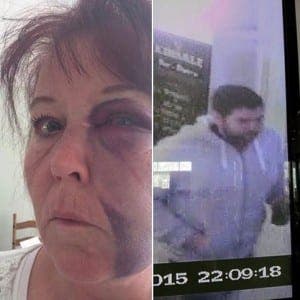 A FACEBOOK campaign has outed a vicious British thug who head butted a granny before stamping on her face while she was unconscious.

The 53-year-old victim stepped in to break up a fight between him and his girlfriend.

The Costa del Sol campaign has seen over a hundred comments from disgusted expats, who know both the attacker and the victim.

Now, witnesses of the assault in Duquesa on Saturday night have handed over a dossier of information to the Guardia Civil to investigate further.

The alleged 22-year-old thug, who works for an air conditioning company in Gibraltar, has so far not commented on the claims.

The attack, outside Kinsale’s restaurant, left the woman in urgent need of treatment, with both a fractured cheek bone and broken ribs.

She was knocked unconscious in the midnight attack, and rushed to hospital.

The restaurant has now released CCTV of the alleged attacker, wearing a light grey hoodie.

Although the victim is too traumatised to talk, her concerned friend Geraldine Mason told the Olive Press: “She saw this guy shouting and swearing at his girlfriend and she was sobbing.

“My friend went to her and gave her a hug. She asked her if she needed help, the girl just looked at her but was too scared to say anything as he was right there.

“When she told the boyfriend to leave the girl alone, he came straight over to her, stuck his face right in hers and we think he headbutted her.

“She fell to the ground unconscious and a witness says he punched her and kicked her while she was on the ground.

“Thankfully there was no bleeding on the brain.

“She has been so brave but once she saw his face on the CCTV tape and found out that he continued to beat her when she was unconscious she just broke down.”

The Olive Press has so far been unable to talk to the man, who cannot be named for legal reasons at this stage.