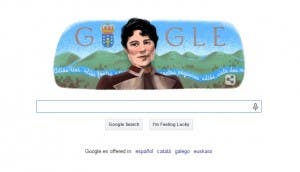 GOOGLE is celebrating the birthday of Spanish writer and poet Rosalia de Castro.

The illustration on the search engine’s homepage is in honour of the Galician Romanticist’s 178th birthday.

A strong defender of women’s rights, Castro became an important figure of Spain’s Romantic movement, known today as the Rexurdimento, or Renaissance.

Her image also appeared on the 500 peseta banknote.