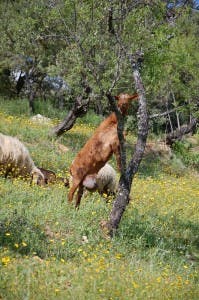 IT’S hard to imagine I have anything in common with Bill Gates, Michelangelo or Pamela Anderson. I’m not rich, I can’t paint – unless it’s the town, in red – and it’s been a while since I might have given the Baywatch babe a run for her money.

Yet we do have one common denominator. We were all born in the Chinese astrological Year of the Sheep, which should make 2015 auspicious for us.

But we’d better make the most of it, as sheep are the unluckiest sign in the Chinese zodiac. I didn’t realise how unlucky until I read that Chinese obstetricians have been swamped by pregnant women demanding caesareans and induced births to get their infants born before midnight on February 17, during the luckier Year of the Horse.

The trouble with sheep in China is that they’re seen as followers, not leaders, gullible and easily fleeced, with self-esteem issues. Clearly, they couldn’t have heard of Bill Gates or Pamela Anderson over there.

It’s ovine discrimination but who can blame them? In a country which operates a strict one-child policy, no mother wants to put her only egg in the losers’ basket.

The Vietnamese call it the Year of the Goat, and it’s the Year of the Ram in Korea. Unlike sheep – though not unlike Pamela Anderson – goats and rams have two valuable pointy assets and I’d rather be a kick-butt goat than a hornless sheep.

Whatever, we ruminants can increase our luck by wearing red through February, an auspicious colour according to Chinese lore, and the closer to the skin the better. This explains why your local Chino bazaar’s lingerie department is coming down with more red basques than there are in the Communist Party of Euskadi.

But despite their strange superstitions I have huge respect for the Chinese in Spain. They show the natives how it should be done with their open-all-hours attitude, smiley customer service and cheap-as-chopsticks prices which have run ye olde Spanish 100 peseta shops out of town.

Even in Los Barrios, a village not blessed with too much of anything except baby clothes shops and dentists, we have three Chinese bazaars and one Chinese supermarket all doing a roaring trade in stuff you never knew you needed, like canned lychees and jumper de-bobblers.

I’m not sure what language the owners speak – Spanglese? Chinglish? – so I never discovered how to work the ‘stop’ function on the alarm clock I got Dave for Christmas, which crows like a cockerel in any language but comes only with Chinese instructions.

I bought it to replace the real rooster in our street which died last year, RIP (Rooster in Peace) and put it under the tree as a surprise but it cocked its doodle-doo – through the gift wrap – every day until Christmas.

Now, every morning when it goes off at 05.30 (so loudly, I’m surprised the neighbours haven’t put in an order for eggs), Dave has to suffocate it with the pillow through 12 repetitions.

It’s not the best start to the working day… And Dave’s look of pent-up violence tells me that, whatever 2015 holds for the 12 animal signs in the Chinese zodiac, it’s going to be a fatal year for one of us … if not the rooster alarm clock, most definitely me the sheep!