AN Olive Press investigation this week exposes a practice of lawyers giving estate agents ‘backhanders’ of up to 20% for working on conveyancing deals. 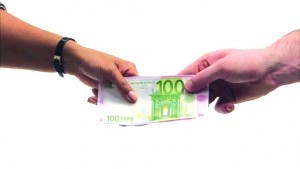 Our ongoing probe hopes to put a stop to the bent practice of agents only giving work to lawyers if they agree to the kickback.

We are now appealing to all clean lawyers and estate agents to step forward in a bid to expose the unethical dealings.

One lawyer, Alex Radford, who has worked on the coast for 12 years, said: “It is a conflict of interest and undermines the lawyer’s need to retain independence and act in the client’s best interests.”

Fellow lawyer Antonio Flores, of Lawbird, added: “The problem has become way too common, to the point that it is now expected.

“With the market finally now changing for the better, it is time for regulators to step in and stamp it out. Congratulations on your campaign.”

Meanwhile, agent Adam Neale, from Terra Meridiana, in Estepona, said: “This practice needs to be outlawed. It is morally wrong.”

To add your name to the Olive Press’ list of ethical lawyers email newsdesk@theolivepress.es or call 951 273 575.

Kick out the kickbacks

UNETHICAL kickback payments from lawyers to estate agents are all too rife on the Costa del Sol.

With lawyers offering commissions or ‘kickbacks’ of up to 20% in return for conveyancing work from estate agents, the industry’s integrity is being broken down at an alarming rate.

The Olive Press is now launching a campaign to find the Costa del Sol’s integral lawyers and compile a comprehensive list of those who do things by the book.

The increasing malpractice between lawyers and estate agents ultimately diminishes the quality of service on offer to the customer, as estate agents opt for lawyers based on their commision rates rather than their ability to do the job.

Consequently, lawyers who abide by the rules are losing out on work opportunities to their unethical competitors who may well be less-equipped for the task at hand.

Expat lawyer Alex Radford from My Lawyer in Spain has been practicing in the country since 2003.

He said that he has regularly been asked for his commission rate since setting up his business in Marbella.

“I understand that malpractice is rife along the Costa del Sol, with Marbella being a hotspot,” he said.

“There have been many occasions when my business card has been put to the bottom of the pile because I will not pay out commissions.

“Clients need to be made aware of the problem. Currently it is difficult, if not impossible, to find out who is breaking the rules as it is all done under the counter.”

Although ‘kickback’ payments are not deemed illegal they do break the national lawyer’s code of practice.

According to Article 19 of Spain’s official code of ethics, ‘a lawyer may never pay, demand or accept, commissions, or other monies from another lawyer, or any other person for having sent a client or recommending future customers’.

And it would appear that the rule-abiding estate agents are just as frustrated by the backhander culture which appears to have crept into every facet of Costa del Sol bureaucracy.

Estepona based estate agent Adam Neale from Terra Meridiana agrees that backhanders and off-the-record payments result in a compromised service for the client.

“I would imagine there is a good argument to make that there is a conflict of interest for both sides,” he said.

“My definition of a good lawyer is one who is ethical, thorough, problem solving, diligent and who is contactable on a Friday afternoon.”

“Under such a cash-for-questions arrangement can either side be said to acting in the best interests of their client?”

To add your name to the Olive Press’ list of ethical lawyers email newsdesk@theolivepress.es or call 951 273 575.

NOTHING TO HIDE: Marbella lawyer Antonio Flores talks exclusively to the Olive Press about dawn raid as part of €2 billion European tax fraud...