AN expat author with the taste for travel has found success with a new novel based in Spain. 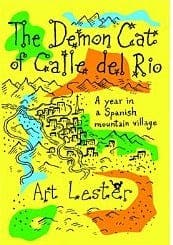 American Art Lester, a former journalist, who moved to Cantilla in the Sierra Nevada, has published The Demon Cat of Calle del Rio, to add to his growing collection of travel books.

“My life took on a different cast when I found the village the book is written about,” Art told the Olive Press.

“It has been more than 20 years since I first (almost literally) stumbled upon it. It’s a tiny place of just 300 people who have inherited over a thousand years of history. It’s a fascinating place.”

The book – which has received glowing five-star reviews on Amazon – details Art and his wife Gilly’s adventures during their year in the mountain village…including accidentally urinating on a neighbour’s sheep.