IF the idea of travelling around the world in 80 restaurants floats your boat, bustling La Duquesa Port is the perfect spot to drop anchor. 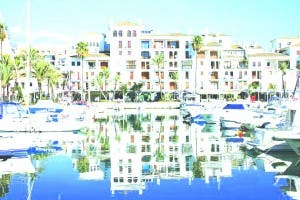 A walk around this whitewashed marina takes scarcely longer than five minutes but just count the blackboards promoting cuisine from all over the globe: China, India, Japan, and Singapore, and a plethora of European ports of call too!

In the maze of alleys behind the port you will also find the excellent Hemingways, its bustling Irish next-door-neighbour Kinsales, as well as Tim’s fish and chips, Italian pizzerias and authentic Spanish eateries, packed together more tightly than wheels in the car-park.

It could be argued that La Duquesa lacks Spanish identity, with more English voices than yachts and more burgers than tapas.

But step out either side of the port, where Spanish chiringuitos (and boatfuls of grilling sardines in summer) fringe expansive soft sand beaches and you’ll be left in no doubt which country you’re in.

This social meeting point sings through its restaurants, cafes and bars, the people who work in them and the visitors who sit in the sunshine enjoying them.

This elegant enclave of turrets and towers, pretty plazas and steps leading to different levels juts out from the mainland, encircling its attractions like an oyster encloses a pearl.

Quirky and eclectic, it’s like a younger sister to Puerto Banus – less glam perhaps, but less snooty too; more affable and, importantly, very much more affordable.

This sociable spirit is enhanced by the people who work here, who hail from all over the world and are woven into the ethnically diverse fabric of La Duquesa.

It makes sense that one of the men heavily involved in the port’s growth is Moroccan Zac Hauswirth. Last year he opened his fourth restaurant here – Casablanca, specialising in food from his homeland.

He also runs the Ocean Café, where bartender Christian LLosa, who has lived in Spain since 2006, raves about her ‘workplace’. “It’s friendly, trendy and always busy, rain or shine.

Because of the people the port is alive and rapidly growing.”

While Christian admits the average age of customers is over 30, that changes during busy weekend ‘happy hours’ which are popular with young and old alike.

And of course, it’s hip to 21st century requirements, with wifi freely available in all the cafes and every possible amenity a short distance away.