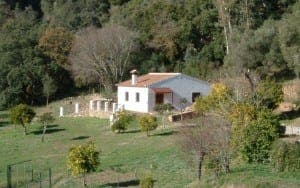 SELF-SUFFICIENCY in the Spanish countryside sounds like an impossible dream but one expat couple who have been there, done that and got the compost heap know different.

British retiree Richard Page, 67, and his wife Pauline have lived off the land at their finca near Farajan in the Genal Valley for nine years, creating an idyllic family home in the process.

But the country estate in the heart of the Serrania de Ronda’s farming district was no overnight discovery.

“We wanted to find the absolute perfect home,” the grandfather-of-three told the Olive Press.

“It took us three years of house-hunting but eventually we found this place and we’ve never looked back.

“It’s completely unique, set on a cork estate where it’s all ancient forest. But the home it is now has been a real labour of love.

“When we first arrived in the Genal Valley and bought the finca, it was a wreck. No one had lived here for what must have been about 40 years but we have completely fixed up all the buildings and brought back the land.”

Now Richard, Pauline and their five dogs are reluctantly moving to a smaller home nearby, as they are unable to manage all the work necessary to keep the farm running. They would like to pass the finca on to a younger, more energetic family who hanker after ‘the good life’.

On the market for €595,000, the stunning estate between Alpandeire and Farajan is right on the river, and one of the few places with flat land ideal for farming.

It comprises just over 19 acres and two properties: a main three-bedroom house, and a second, smaller guest house, with two bedrooms and an open-plan living area.

An ideal home for a family looking to get back to nature, it also has huge potential as a rural tourist retreat, a centre for glamping or even as a bar and restaurant.

“Everyone’s pretty much self-sufficient on the estate, where there are about 40 fincas in all,” says Richard, originally from Berkshire. “We have five neighbours but you can’t see them and there’s a lot of peace, quiet and privacy.

“We have chickens and rabbits, and we grow a lot of our own vegetables,” he continues. “In the days gone by, the finca was a fruit farm and we still have a lot of fruit trees. We grow nisperos and oranges, mandarins and figs, and also almonds and walnuts.”

It has been an idyllic existence for Richard and Pauline, and the perfect retreat for their two daughters and three grandchildren to enjoy on visits.

Richard is full of anecdotes about their rural Spanish dream, and has fond memories of taking his grandchildren for tractor rides and watching them running with the dogs by the river.

“We’ve made a real effort to fit in with the Spanish lifestyle, and we have some extremely good Spanish friends from whom we’ve been able to learn so much.

“They’ve been absolutely wonderful. So many times we’ve been out driving and people have been out on their horses, giving us their spare cabbages or peppers. Or Alonso’s been over to the house while we’ve been out and left some vegetables on the step for us.

“Then, when we do our harvest and we have too many nisperos, or something, we give them out to our neighbours.”

“It’s a very beautiful place where we live and it has been a real experience. I wouldn’t have missed it for the world.”