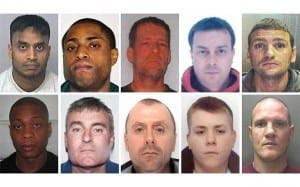 A TRIO of dangerous sex offenders have been named on the list of 10 most wanted British fugitives hiding out in Spain.

An alleged paedophile and two suspected rapists have been named as part of Operation Captura’s clampdown.

A convicted killer and a number of drug traffickers also make up those wanted, many of whom are believed to be hiding out on the Costa del Sol.

One of the fugitives is Mohammed Jahangir Alam, 32, originally from Bangladesh, who was sentenced to 14 years for rape in his absence in March 2010 .

Also on the wanted list is 52-year-old Carlo Dawson, from Croydon, south London, who is accused of indecently assaulting a 12-year-old girl and making indecent photographs of a child.

Paul Buchanan, 29, is also wanted on suspicion of attempted rape. Originally from New York, Buchanan is accused of attacking his victim by his flat in Redditch, Worcestershire.

Also on the list is suspected drugs trafficker Jayson McDonald, whose suspected luxury villa in Coin was previously raided.

Former soldier and previously convicted killer Shane Walford is also wanted after he broke the terms of his bail.

While Michael Roden, 25, makes up the list and is wanted on charges of importing cannabis.