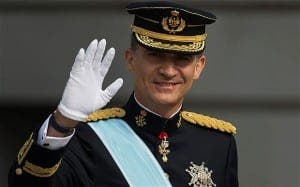 KING Felipe VI has confirmed that there are ‘no signs of survivors’ on the crashed Germanwings passenger plane.

The airline has now confirmed that a total of 150 were believed to be onboard, 144 passengers and six staff.

King Felipe and his family had been in France on official duty and were scheduled to speak at a second world war memorial this afternoon.

The plane crashed at 11am this morning en route from Barcelona to Dusseldorf, Germany.

Spain’s deputy prime minister confirmed that 45 of the passengers were believed to be Spanish.

Germanwings have now opened a free-phone number for the families of the passengers involved, from Spain call 900 808 890.