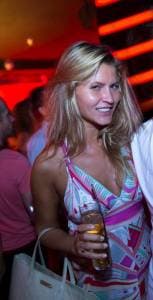 The two men faced questioning in court yesterday, as a police gag on the case was lifted.

The court was shown pictures taken outside Aqwa Mist night club in Puerto Banus showing the two men driving away in a car with Agnese on the night she disappeared in September 2014.

Capper is the son of Frank Capper, a well known British figure from Essex and a key player in Marbella.

While Porter, from Liverpool, is said to have worked as an enforcer for the pair, a source close to the investigation told the Olive Press.

At the hearing both men remained silent when questioned.

Pictures that show three unidentified men taking a large and heavy bag onto a boat belonging to the accused the following night were also shown at the hearing.

A spokesman for Agnese’s family said: “Our Agnese has not been seen since and yet there are still no charges.

“Seemingly, Spain allows violent people to operate with impunity in Marbella. This has to stop now. We need to stop this.”

Porter had previously admitted to being the the car with Agnese on the night she dissapeared, however he claims he fell asleep before Capper dropped her off, the source told the Olive Press.

Police seized Frank Capper’s yacht in March in connection to the case after it moved from its dock in Puerto Banus to Cartagena, in Murcia.

DNA samples were taken and sent to Madrid for testing. We still await the public announcement from these tests.