THE body of a 25-year-old Polish tourist has been found in the sea off Nerja, in Malaga.

A search and rescue mission had been launched to find the man, after he fell five metres from a cliff after a night out with friends.

The body was spotted by a Guardia Civil helicopter in a nearby rocky area to where he had fallen on Wednesday morning at the La Torrecilla, a few meters from the Balcon de Europa.

He reportedly was attempting to jump from a platform on to a rock when he lost balance and fell.

Police are treating his death as accidental at this stage. 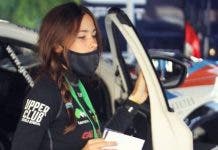