LIKE a hungry Big Brother, the hulking Japanese factory ships lie in wait like hungry sharks ready to buy up local stocks of Spain’s rare and valuable Atlantic bluefin tuna. 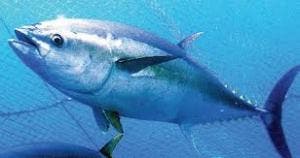 Hoovering up around 90% of the Spanish fleet’s quota, the fish is immediately deep frozen and sent on its week-long journey to the Land of the Rising Sun.

It is hardly a surprise: the bluefin’s meaty red flesh is such a valuable commodity in Japan, that a 222kg specimen sold for a record-breaking €1.1 million at Tokyo’s Tsukuji market in January 2013.

Clearly, trading bluefin is extremely lucrative and Spain is in a prime position to capitalise on one of the ocean’s fastest, strongest and most robust predators.

However, market demand and the bluefin’s slow growth rate has placed the species under threat and, these days, strict quotas are in place to prevent overfishing.

As Richard Rossington of Atuna.com explains, Spain’s allocation to catch this delicacy in Springtime is split into various regions which divide up their allocation according to fishing seasons.

“The bluefin enter through the Straits of Gibraltar to reproduce in Spring and are caught when they come back out as they’re bigger and have had the chance to reproduce,” he says.

“When they’re trapped they’re still alive, so fishermen take their quota and release the rest.”

Last year, however, Spain’s fishing fleets completed their 2,540 metric tonne Spring quota in a record 48 hours at the beginning of May.

While in favour of tight controls, they have asked for a larger quota for this season and have received at least a small increase to 3000 tonnes.

But it is still not enough, which is why a revolutionary new system has been launched in Murcia to try and help boost stocks.

Beginning this June, four huge tanks containing seven million tons of water will become home to 40 adult tuna fishes which will produce eggs over the summer.

Launched by ICRA (Infrastructure for the Control of the Reproduction of Bluefin Tuna), the project aims to rear the young fishes in specially designed tanks before releasing them into larger cages at sea, where they will reach full size.

A sustainable diet of artificial feed in quantities that depend on the tuna’s age, size and water temperature will increase the fishes’ body fat so they sell for a higher price.

Their reproduction will be artificially controlled, somewhat controversially, through hormone implants.

The scheme, funded with €4.8 million from the European Commission and €1.2 million from the Spanish Institute of Oceanography (IOE), hopes to alleviate pressure on wild fisheries while producing higher quality tuna.

“Our aim is to control the bluefin’s reproduction in order to obtain fertilised eggs of high quality and quantity,” explained coordinator Dr. Fernando Garcia.

If successful, it could be a life saver for this magnificent species, while global gourmets can still enjoy their juicy tuna steak at a reasonable price.