THE British organiser of a costa music festival is determined to play on despite Mijas Town Hall announcing that the festival is illegal and will be cancelled.

Carl Wileman, organiser of Mijas Rocks, on May 30, has slammed the town hall for putting his festival in jeopardy.

It came after councillor Juan Carlos Gonzalez insisted that the festival had ‘failed to obtain the proper authorisation’ and was ‘fraudulent’ and would be ‘cancelled’.

However Welshman Wileman insisted: “We have attended several meetings with the deputy mayor and chief of police and have a signed 150 page security document approving the festival.”

The Ferrari-driver, based in Mijas, added that councillor González’s comment that tickets were being ‘sold fraudulently’ could not be ‘further from reality’.

“The town hall have made a huge error – we have done everything by the book,” added the Liverpool fan, who is also angry that the town hall failed to meet his legal representatives last week.

Despite the row he and other promoters are still hoping the festival will take place. 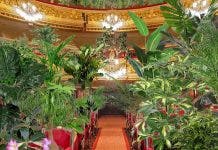