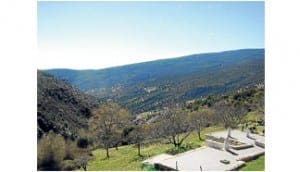 A FAIRYTALE farm with a history as rich as its rural surroundings is up for grabs in Almeria.

Set in the foothills of the Sierra Nevada natural park, it was once home to a Duke.

And not just any Duke… The previous owner was a descendant of the Mendoza family which wielded its power throughout the country from the 14th to 17th century.

Now home to expats Shafik Zananiri and Doris Weber, the couple are looking for new owners to buy into their dream lifestyle as they downsize.

Stumbling on the mystery farm in 2006 and falling instantly in love with it, Shafik and Doris immediately began searching for the owner of their ‘dream retreat’.

Locals said it would be an ‘impossible’ task but after two years chasing shadows, they traced the title deeds to a Duke.

“The house is steeped in history,” Shafik says. “When we were looking on the map we noticed that all the farms had names to do with death and destruction and then, in the middle of them, was La Rosa.

“We were fascinated by it straight away.

“First we heard rumours that it was owned by a nun, then we told the house belonged to Don Kilowatio and finally we were led to this Duke and after two years trying to track him down, we were eventually able to buy our perfect finca in 2008.

“It really is a complete world on its own.”

Local legend says ‘nobody has ever gone hungry at La Rosa’, because the land around it is so rich and diverse.

With 25 hectares of land and two farmhouses of 250m2 (renovated) and 200m2 (pre-renovated), this rural idyll is set in breathtaking scenery, surrounded by pines, chestnut, holm oak and walnut trees.

And with 12 hectares of south-facing irrigated farmland, the home offers a self-sufficient lifestyle.

The land even has the water rights to the main source of the Andarax river, which forms the south border of the farm, and Shafik and Doris have harvested 5,000 kilos of chestnuts every year.

It is also a perfect retreat for hunters, hikers, fishers, skiers and all-round nature enthusiasts.

As Shafik explains: “The place has something for everyone and there are plenty of hidden corners waiting to be discovered.

“It is great for people who love horse riding as well, the place is open and wild waiting to be explored. You can ride your horse wherever you want, gallop as fast as you want to gallop.

He added: “We bought our first house in Spain in 1978 and know the area very well.

“Before finding La Rosa we looked at more than 180 farms. We wanted somewhere with the perfect land for growing a diverse range of crops with a good level of privacy.

“There are no neighbours in sight and yet it is not the end of the world, being close to Laujar village.”

The attractive main solid-stone building features floors made from recycled slates which once covered the roof. The sublime kitchen boasts a one-and-a-half metre wide original stone oven. There is also a big sitting room, en suite master bedroom and a separate guest wing with sitting room, bedroom and bathroom and its own entrance from the outside and into the kitchen.

The second building, out of sight and completely separate from the main living quarters, is currently used to stable horses but could equally be transformed into separate living quarters.

Shafik and Doris have enjoyed their hidden paradise for seven years and would love to pass on their dream home to a caring and appreciative new owner.