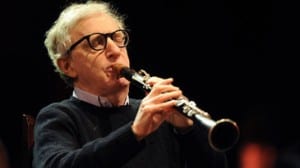 HOLLYWOOD movie director Woody Allen was paid €100,000 by the Junta in Extremadura to perform at a pre-New Year’s bash.

Four-time Oscar winner Allen and his New Orleans Jazz Band received a total of €160,000 to perform at the December 30, 2014 gig in Badajoz.

The 79-year-old movie mogul, who plays clarinet in the band, also reportedly provided a 20-page contract of demands, including sleeping arrangements, food and drink requirements and assurances that his wife would not be photographed.

The following night Allen and his band played in the New Year at Barcelona’s Liceu theatre although it is not known whether he received a similar fee.

However, last month the city announced plans to honour the actor-director with his own museum, to be called The Woody Allen Centre.