IS it a castle? Is it a folly? Or a piece of redundant scenery from a movie set?

The origin of the brick tower standing tall on the hillside above Alhaurin el Grande, has been the subject of heated debate, splitting opinion across the Guadalhorce Valley and beyond. 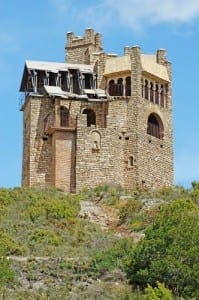 Many thought it was a Medieval castle, rumours did the rounds that the Moors built it and there were even whispers that it was a glorified tourist information centre.

Some people even remember it from the opening credits to the ill-fated BBC soap opera, Eldorado.

Now the Olive Press can settle the score once and for all by definitively revealing the true identity of the castle in the sky overlooking Alhaurin.

It was built as a water tower, cunningly disguised as an ancient castle to fit in with the region’s surroundings.

Although it turns out it was a bit of a folly after all – constructed to provide irrigation water for a golf course that never happened.

However, it is still something of an icon in these parts, visited by those who recall it from Eldorado and others who are hoodwinked into thinking they are visiting a historic monument.

Fit for a king! Medieval castle in Girona, northeastern Spain goes on sale for €11 million