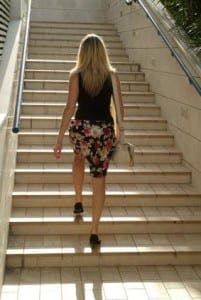 THERE are more elevators per person in Spain than anywhere in Europe, but one day next month Spaniards will hit the stairs.

There are an amazing 19 elevators per 1,000 people in Spain (the EU average is 11), but most will remain unused on June 5 as the country takes part in a new European fitness initiative.

No Elevators Day, will be observed in 38 European countries as part of the NowWeMove campaign.

In their bid to get 100 million more Europeans active in Sport, the ISCA (International Sport and Culture Association) has set numerous pan-European events.

A Europe-wide flash mob is also planned, with the first week in September mooted as Move Week.