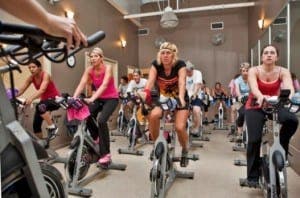 THE gym was beautifully modern, with air conditioning and flat screen televisions, and it was located below a block of flats on the outskirts of the city centre. To be more exact, it was located below my flat. I tell you this because now, in revealing that it took me five months to finally join, you will have some idea of exactly how lazy I am.

I decided to join after seeing a picture of myself in skinny jeans and discovering that my body most resembled vanilla ice cream melting on top of a cone. I approached a slim and smiley receptionist who took my details. She opened a brochure and explained that I could choose three classes as part of my membership. I looked down. What’s that? I asked. An intense workout with ropes and weights. She smiled.

I felt suspicious of anyone who could use the same tone to describe medieval torture as they would a spa day.

Eventually we broke down the list and I felt confident that I had secured the easiest options. They were Pilates, spinning and step.

From what I had learnt on the internet, Pilates was more about breathing correctly. After 25 years without any major complaints from my doctor, I assumed it was something that I was close to mastering, so when I entered the class, I felt confident. I lay on the mat, eyes closed, listening to the soothing sound of the instructor´s voice. After realising I couldn’t understand the instructor’s directions, I propped myself up and looked across at the woman next to me for guidance. She was easily in her mid-sixties but seemed more fragile, and was a little slow and shaky. Perfect role model, I thought.

We began with our backs on the ground and our hips in the air. Breathing, of course, in a controlled manner, and as expected I was excelling. The instructor said something and everyone began rocking, their bodies gaining momentum. Suddenly, the woman next to me swung backwards and her body transformed into a perfect arch, with her feet inches away from her salt and pepper perm. I attempted this several times, my legs in the air, and every time I collapsed, English profanity echoing in the hall. Forget it! I said finally to the sea of flexible pensioners.

I fell back onto the mat, and my Pilates class turned into an hour long nap.

I liked the step instructor. He was a young man of around thirty, with thin tattooed legs, and a huge stomach. His neon yellow tank top and purple cycling shorts brought out his deep tan, and above all, I liked how he called me butterfly and he said that my bum looked like a pumpkin which was quite motivating.

We each took a step from the pile. I aligned myself next to a woman at the back of the class. We began a warm up and I started to gain confidence. Like this? I asked the woman across from me, pivoting with my leg kicked behind me. She smiled and nodded.

The instructor came round and told me I looked like I was about to commit suicide. He pointed out that the jump wouldn’t be near enough fatal and then signaled to the woman who had quickly corrected her own position, and told me to be more like her.

I can honestly recommend step. It’s fun and challenging. I have no coordination and sense of rhythm, yet I managed to eventually get the hang of it, and even with minimum effort, I worked up a sweat. However, it does one good to repeat over and over, no soy Latina, as you kick about to Shakira, and you might avoid falling off the step as I did. After which, I grimaced on the floor, holding my bended knee against my chest and rolling a little from side to side. It hurts! I cried in English to the instructor who kneeled beside me. It’s probably a little sprain, mariposa. He assured me. Let me take a look.

No! I yelled, and I winced. I haven’t shaved my legs (something else I suggest taking care of first).

Spinning was another class that I had underestimated, but one that I recommend because it consists of a great variety of workouts and also you can put in as much effort as you want to. Some were giving it all the energy of the Tour de France, whereas my pace was closer Sundays in the park.

I’d never learnt to ride a bike. I have a vague memory of peddling into the side of a yellow skip outside my house in 1996. So, I began slowly. It was great and I was gradually getting carried away with the music. Where had I heard it before? It’s David Guetta, I thought to myself, pushing up on the pedals. But I was wrong and time revealed the eerie chimes to be a forty minute dance remix of The Exorcist theme song. The instructor played everything from heavy death metal with bagpipe samples to Meatloaf covers. It was a intense, but I had never pedaled faster.

Joining a gym in a foreign country is a fantastic way to relieve all of the stress of being a strange and new place. It’s perfectly normal to feel isolated when you arrive to Spain and a gym is a great way to feel part of the community, without having to worry about social and language barriers. For me, just one month of fast paced cycling reduced my stress levels and transformed me into a calmer, more capable person. And for the remaining four months after my membership expired, Doritos and salsa on the sofa also did the trick.