SPAIN’S most glamorous resort is set to enjoy another record breaking summer as tourists, celebrities and investors continue arriving in their 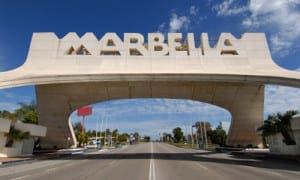 The combination of a superb microclimate, a dash of designer brands and a constant stream of celebrities, from Hollywood A-listers to reality show wannabes, means that Marbella can pretty much ignore the political bun fighting that is going on in Spain and get on with the serious business of having a good time and making money.

It’s not all tourists and celebs, however. The past 12 months have seen the luxury residential property market show real growth.

Property values have historically been very high, and although the recent economic crisis resulted in a realistic realignment in prices, the past few months have seen values begin to rise as international investors are once more being lured in by the country’s low prices, investment opportunities and lifestyle.

Foreign investors have been attracted to Spain due to the ‘Golden Visa’ scheme – which grants automatic residency to non-EU citizens who invest €500,0000 or more in Spanish property. This has has attracted a growing number of residency investors, mainly from the Far East, Middle East and Russia.

Meanwhile, Marbella Town Hall has also been proactive in marketing the town, attending a variety of trade shows and exhibitions in the mentioned regions.

It is not exactly a hard sell. Internationally renowned as a playground for the rich and famous, Marbella boasts literally miles of stunningly beautiful beaches, is a favourite spot for golf enthusiasts and has an enviable climate.

The increasing number of high profile events is adding a sprinkling of stardust to the already eclectic social calendar.

As do the red carpet charity galas held by Antonio Banderas and Eva Longoria, now a regular fixture on every Marbella socialite’s calendar.

Even US First Lady Michelle Obama’s visited Marbella a few years ago, an event which made front pages around the world and – according to the town hall – brought in €800 million in media coverage.

Restaurants such as La Sala and bars including the famous Linekers are ‘must do’ destinations for the hordes of fans wanting to imitate their TOWIE idols or bump into a Premiership footballer or two and, though they might not be to everyone’s taste, they certainly bring a dash of colour to Banus!

Written off several times before as being past its sell by date, Marbella continues to attract a steady stream of the rich and famous, and is set to do it all again and this summer!

MARBELLA began its life as a town in the seventh century BC, when it was a Roman settlement called ‘Salduba’.

This is also the name of a well known bar at the entrance to Puerto Banus that has been there for centuries too. Meanwhile an original Roman bridge (above) still stands surreally in the middle of the Puente Romano Hotel and a few kilometres away is the restored Roman villa at Rio Verde with its beautiful mosaics.

A sleepy town during the period of Al-Andalus, Marbella was retaken by Christians in 1485. The Plaza de los Naranjos (Orange Square) has been the focal point of the town since then and the town hall is still located there today.

Fiona Govan - 20 May, 2022 @ 18:30
HEALTH authorities in Spain believe a gay sauna in the capital is the source of the outbreak of rare monkeypox virus which has so...