TWO Spanish men have been gored to death by bulls in two separate incidents during the San Juan fiesta. 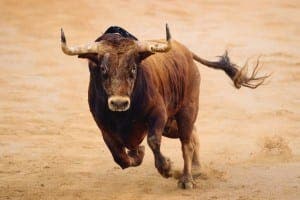 A 43-year-old man was gored twice by a bull during celebrations in the town of Coria, Extremadura on Wednesday, despite standing behind a protective fence.

In graphic Youtube video (below) which has been circulating on Spanish media, the bull charged at the crowd, its horns passing through the bars of the fence and piercing the man’s abdomen and chest.

The victim was rushed to hospital where he died from his injuries.

In a separate incident, an 80-year-old bullfighting fanatic died in hospital on Wednesday in Ampolla, Tarragona after being gored.

The bull charged at the man with both horns during a special bull fight celebrating the festival of San Juan.

He was rushed to hospital where he received blood transfusions in vain and died shortly after.

Both victims have yet to be named.