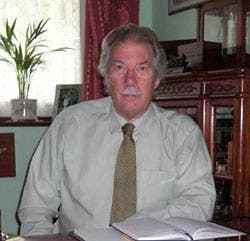 “LEAVING your investments to the so-called professionals is like embarking on a round-the-world voyage using the stars to navigate,” says Douglas Chadwick, the outspoken founder of Salty Dog Investor.

The 72-year-old is at home with maritime metaphors, having worked at sea for much of his life.

But now he’s set his compass in a new direction to help Olive Press readers navigate choppy financial markets and make the most of their savings with his new column.

Starting in this issue, he’ll be offering advice on how to play the money markets DIY-style. And he doesn’t mind if he rocks a few fund managers’ boats in the process.

Douglas began his working life on trawlers, aged 14, and studied theoretical physics at Sussex University. But the  investments world is far from being uncharted territory. He has doubled his money since deciding to manage his own finances.

He developed his passion and knowledge after ploughing the profits from his successful flatpack furniture businesses into investments and failing to see a return.

“I invested a lot of money in bonds but after some years I was annoyed to find out they hadn’t grown at all, so I started doing some research into the markets,” says Douglas, now living in Oxfordshire.

“In five years, I had doubled my money. And I realised it isn’t actually difficult at all.”

Tired of seeing savings and investments festering in ISA’s and dog funds at the hands of professional financial investment firms, Chadwick set up Salty Dog Investor four years ago.

Named after the sea he knows so well, the firm aims to keep clients’ funds on a steadier course for success.

“The purpose is to help people who have been conned by the financial industry to make better use of their money,” explains Douglas.

“There is no readily available information on which sectors are doing well, making it hard for people to manage their own money.

“So we do the work, looking at only the top 20% of funds to make sure people get a secure and steady return on their investment.”

QUEENS OF BLING: Move over Kanye West, Spain and UK’s royal families’ jewellery put you in the shade