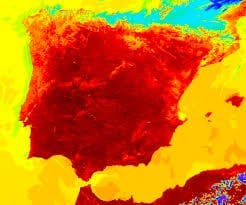 THE first heat wave of the summer months hits Spain today and will last until Tuesday.

Malaga will see highs of 36ºC and early warnings indicate that it will be even hotter inland in the Axarquia region. Ronda, Marbella and Antequera will reach above 34ºC while other parts of the Costa del Sol are expected to reach above 30ºC.

The Guadalquivir area will see a temperatures soar as high as 40ºC on Saturday, which is classified as an orange alert. Andalucía, Valencia and Murcia have all been placed on a yellow alert where it should reach between 36º and 38º in most areas.

According to the State Meteorological Agency (AEMET), the cause of the temperature soar is the result of a mass of very hot air which entered the west and south peninsular on Wednesday.

Temperatures are expected to increase on Sunday and will continue early next week as the heat wave progresses northwards.

The heatwave comes after Andalusia experienced it’s hottest May in 68 years which has left much of the region dangerously dry.