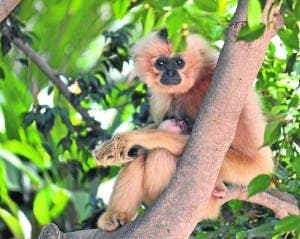 IT was once considered among the worst zoos in Europe.

So bad was former Fuengirola zoo that animal charity Born Free led a probe alongside the BBC and various media groups to have it closed down.

And duly it did in the late 1990s, reopening again a few years later in 2001 with a totally different philosophy.

Gone were the cramped cages constructed in the 1970s, to be replaced by a tropical green paradise of open spaces, rivers, waterfalls and an overriding sense of calm.

So good is the zoo – now reborn as Bioparc – that a few years ago National Geographic magazine voted it one of the best in Europe. Articles have also appeared in America’s prestigious Time magazine.

And it has simply gone from strength to strength since then, with the Madrid-based company running it spending millions each year, making it better and better.

The zoo – which has another park in Valencia and new ones scheduled over the next few years – collaborates with 25 international research and breeding programmes for endangered species.

It even works with some species that are effectively extinct in the wild, in particular the Sumatra tiger and gorillas.

There is an important schools and education programme and its charity arm allows for days when underprivileged and seriously ill children can visit for free.

Even better, the zoo has concentrated on making sure animals are able to interact with one another and that there are absolutely, crucially no bars.

“We fight extremely hard to get away from the concept of cages,” explains marketing boss Alejandro Beneit. “It is vital to keep the animals as happy as possible and unstressed.”

The most recent addition is a stunning Indonesian-style temple, built brick by brick to look as authentic as possible.

Constructed by a team of Czech builders, it took a year to build and now sits as a charming backdrop to a number of closely cohabiting species, including tigers and Komodo dragons.

In summer the zoo opens until 11pm and has some excellent offers for families, including African dance performances and feeding demonstrations.

“The best times to visit are around 10 to 11 in the morning or the evening,” adds Beneit, from Cadiz. “During the heat of the day, like most sensible people, the animals take it easy.”

Best of all, make sure your children look out for the ring tailed lemur, who they will quickly identify with Julian, the star of hit movie Madagascar.