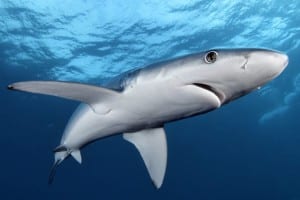 Just weeks after a blue shark was filmed swimming in Fuengirola, police closed all four beaches of the resort Pineda del Mar near Barcelona.

Four blue sharks, a species not considered dangerous to humans, were seen and a red flag was erected over night until the waters were safe for bathers.

Swimmers in this part of Catalunya have been advised not to swim too far out as the danger warnings are still in place.