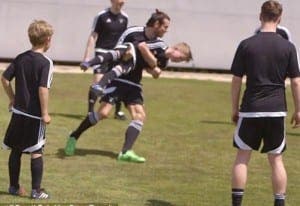 THE world’s most expensive footballer Gareth Bale has boosted his ‘Mr Nice Guy’ reputation by holding a training session with kids in Madrid.

A group of lucky Brits were flown over to Spain’s capital to partake in a once-in-a-lifetime kickabout with the Welsh winger.

Laughing and joking with the children, Bale showed his sensitive side as he held pre and post match team talks at a Real Madrid training facility.

Bale has been strongly linked with a move aw16ay from the Bernabeu, but the former Spurs man recently said he wants to fight for his place in the Madrid team.