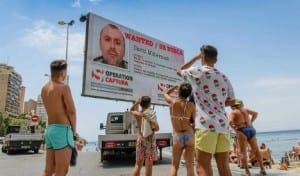 MOST tourists are used to being bombarded with adverts for menu del dias, cheap sangria and day trips.

But now those in Spain’s most popular resorts face an altogether different kind of billboard advertising.

The faces of Britain’s most wanted fugitives have been emblazoned on a 13-foot digital screen to be toured around Spain’s expat hotspots.

This latest initiative from crime-fighting charity Crimestoppers is designed to make everyone aware of the 18 remaining individuals wanted by Operation Captura.

The billboards will be driven up and down the Costa del Sol and Costa Blanca and then parked outside shops, bars and nightclubs.

The fugitives – wanted in connection to crimes including murder, rape, drug trafficking and indecent assault of a child – are believed to be hiding out in Spain.

Crimestoppers hopes to flush out the likes of Derek Ferguson, who is Scotland’s most wanted.

“This is something that we have never done before, but we believe that broadcasting these fugitives’ faces right in their back yards will encourage the public to speak up,” said Roger Critchell, of Crimestoppers.