FOUR more people were gored by bulls on Saturday, the fifth day of Pamplona’s San Fermin running of the bulls festival.

The victims bring this year’s tally of goring victims to eight.

Of those gored before Saturday, three — two Americans and a Brit — have been released from the hospital. The fourth, an Australian, remains hospitalised.

Two of those gored on Saturday are also Americans.

More than a dozen others have been injured since the festival began on Tuesday. 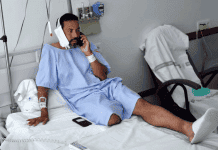