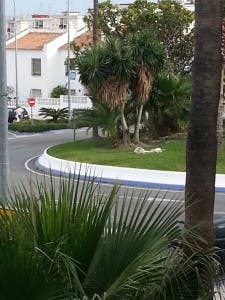 A PAIR of ‘roundabout dogs’ in Nerja have been rounded up after locals rallied together in a rescue mission.

The two abandoned dogs had set up camp on the dangerous roundabout between Iranzo and Burriana Beach but were terrified of expats who tried to feed them.

But after seeing how undernourished they were, Animal group Estacion Esperanza managed to lure one of the Mastin cross dogs off the roundabout to safety.

After attempts from firefighters, the other dog was caught seeking refuge in a nearby urbanisation and the two have now been reunited at the Raza hotel in Torrox.