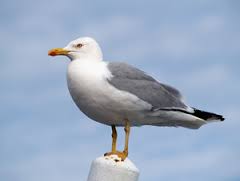 A BRITISH tourist is wanted by the Guardia Civil after he fed a seagull a chip laced with Ketamine.

Josh Greenwood, from Huddersfield, received a torrent of abuse, and even death threats, after posting a video of himself feeding the bird in Ibiza.

Alongside the video, he posted on Twitter, Greenwood wrote: ‘The lads over here in Ibiza have got Sally the seagull f****d up of a chip with some KET on it!’

After receiving hundreds of abusive messages, Greenwood announced via his Twitter account that the Guardia Civil had messaged him and want to track him down.

Backtracking on his earlier message, Greenwood is now insisting the white powder shown in the video was salt, not ketamine.

Teenage tourist, 18, in coma in Spain after headache turns out to be blood clot on brain